If you were also one of the minority of socialites who attended parties on the rare windows of opportunity between essay writing and attending lectures (yes we did….), then you may have enjoyed the occasional rather raucous evening of entertainment at 9 Arthur Street.

One of the residents of that most famous of PE student addresses was Maureen McLaughlin. Sadly Maureen died in February 2007 after a long illness, but she made quite an impact within the Bingley community and many people may remember her as a unique, talented, bad-tempered, spirited, feisty student; and a loyal friend to so many. 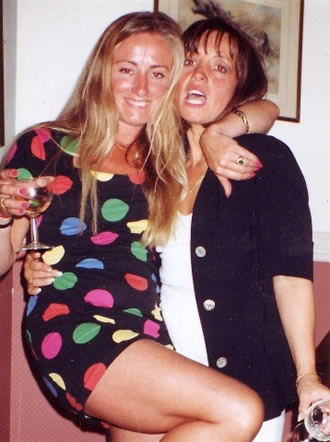 Above : Maureen in typical pose with sister Margot.

Maureen would think nothing of taking to task anyone who stood in her way, or indeed had the audacity to question her opinion or that of her friends and, despite her petite stature, she had the presence of a giant when the mood took her. Uninvited guests to an Arthur Street gathering would certainly be shown the door by Maureen. If you dared to question the validity of your exclusion, then Maureen always had the last word; or, as one poor chap found out to his cost, she was just as likely to leave you with a bloody nose for your impudence!

Arthur Street was a long and steep journey home after a late night playing Buzz and keeping our patient barman Arthur company, so trips home were often rather interesting. It had been known for various modes of transport to be acquired to help along the way, including on one occasion a passing laundry basket and on another a ‘borrowed’ a car. Maureen was inevitably at the centre of such high jinks and laughter was the order of the day.

Alongside that ability to make life fun, Maureen was also a gifted teacher who inspired the children she taught in Bridlington and Addingham. After a number of years in the profession, she left teaching but continued to pursue her interests in tennis, horses, shopping and enjoying life to the full. Despite being in ill health for a number of years before she died, Maureen retained her sharp sense of humour and warmth. She was married to Michael for many years and is sadly missed by her large family and many friends.

There is no doubt that Maureen had extremely fond memories of her time at Bingley and would have been one of the first to buy her ticket to the Centenary Celebrations. Many of the people who knew her from those heady, irresponsible days will also know how to enjoy the opportunity to regress once more!

Thanks to Marianne for the words.