The Bingley College Timeline attempts to show the development and growth of the college from 1906 to its closure in 1979. Some of the information contained in this timeline has been taken from a document entitled Bingley Training College Calendar 1906 – 1968.

April 1906 : Sub Committee set up to consider the possibility of setting up in the West Riding of Yorkshire a residential training college for 200 women.

January 1908 : Approval was given that the Lady House Estate, Bingley, was the most suitable site. 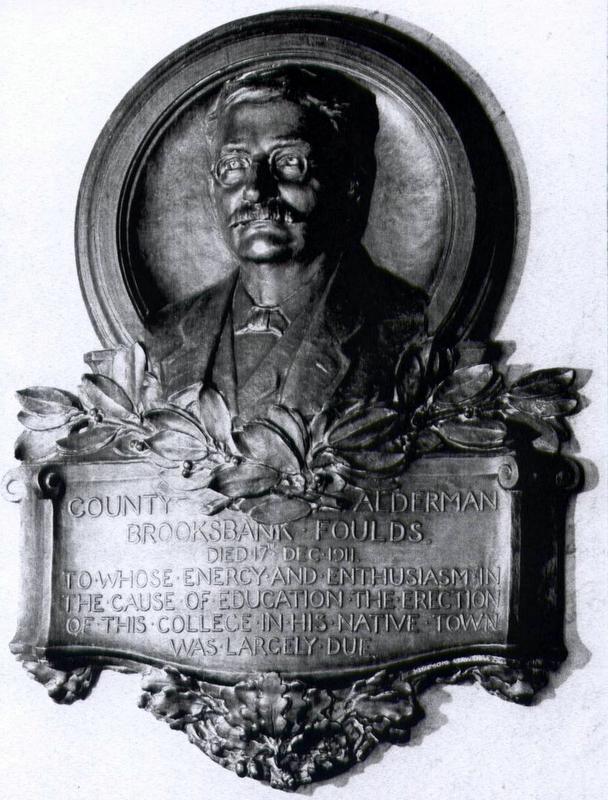 March 1908 : County Councillor Brooksbank  Foulds (above) was asked to interview the owners of the Lady House Estate – The Governors of Bingley Grammar School, William Ferrand Esq. This memorial was situated in the main college building.

June 1908 : The sketch plans of the proposed hostels and main block were considered.

November 1908 : The approval of the Board of Education was given to the plans and estimates excepting those relating to the gymnasium, the laundry and the swimming bath. Tenders were considered, including those for work on the swimming bath.

March 1909 : Contracts for building operations were let. The President of the Board of Education, The Rt Hon Walter Runciman MP, accepted the invitation to lay the Foundation Stone of the Central Block. Walter Runciman (Liberal MP for Dewsbury) was in Asquith’s Cabinet and was born in South Shields. His wife Hilda, also from South Shields and a women’s activist. Hilda also became an MP and they were the first married couple to sit in the House of Commons.

May 1909 : The above foundation stone at Bingley College was laid on 24th May 1909 by Walter Runciman (1870-1949) who was the President of the Board of Education in Asquith’s Liberal government. Bingley College was  built c1909-11 under the direction of J. Vickers Edwards (County Architect). Edwards the architects were also responsible for the design and construction of two Yorkshire asylums, High Roydes, Menston in 1888 and Storthes Hall, Kirkburton, in 1904.

August 1910 : The provision of the swimming bath was abandoned for the time being.

December 1910 The post of Principal of the College was advertised – 42 applications were received.

January 1911 : Provisional estimates for the hostels and general furnishing of the College and for educational equipment were passed by the County Council and tenders for the planting of trees were accepted.

May 1911 : Miss Helen Wodehouse MA DPhil, at the time Lecturer in Philosophy at Birmingham University, was appointed Principal of the College, as from August 1st.

September 1911 : The Central Block, three halls of residence, the Kitchen Block and the Block containing the Gymnasium, Laundry and the Heating and Lighting Plants were completed and ready for occupation. The picture above was probably taken in 1910 and shows the halls and main building nearing completion.

2nd October 1911 The first students – 102 women – came into residence, 22 for one year only, having already passed the Board of Education Teacher’s Certificate Examination.

31st October 1911 : The College was formally opened by Sir John Horsfall, Chairman of the West Riding County Council. A gold key was presented to Sir John by Mrs Eddison on behalf of the Training College Sub Committee. The Inaugural Address was given by Mr Michael E Sadler CB MA LLD, the newly appointed Vice Chancellor of Leeds University.

September 1912 : Two hundred students were in residence of whom fourteen were taking a one year course. A special course in housecraft was introduced. Three students remained for a three year course, and specialised in English, Botany and Physical Exercises.

June 1913 : It was agreed that newspapers should be provided for students.

November 1913 : Plans for the lighting of the stage were carried out.

1914 : A voice production course was formed. Plans for a swimming bath at an estimated £2000 were submitted by the County Architect. Charges of meals to members of staff:- Breakfast 6d. Lunch 6d Supper 6d. Dinner 9d. Tea 4d. Bedroom 1/- per night, composite charge per week, excepting Breakfast 7/6 per week. Students who were able to swim and had obtained their parent’s permission were allowed to boat on the river excepting on Saturdays after midday, or any other days considered unsuitable by the Principal.

1915 : A weather vane was purchased. Grants were first given that students might visit places of historical and architectural interest.

September 1915 : Address given by his Grace, The Lord Archbishop of York, to mark the opening of the new session.

1916 : First year in which the relation between the number of West Riding and non West Riding students was considered. 114 from the West Riding and 86 from outside this year. For many years the proportion varied; first consideration was given to West Riding applicants.

1918 Extensions to the College including the provision of an isolation block were considered.

July 1919 : The resignation of Dr. Wodehouse, after her appointment of as Professor of Education at Bristol University, was accepted with regret. The provision of a motor vehicle was considered. Approval was given for the formation of a Day Continuation Class for Girls.

December 1919 : Sadly, the principal, Miss Mary Lilley died after being in post for just 5 months.